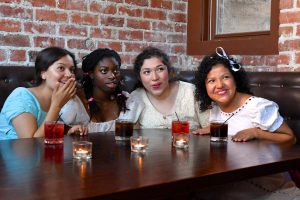 The Garcia girls take us back.

Their stories speak of children trying to understand the world around them and of young adults wanting to be loved and to fit in. While such themes may be common, their stories offer the twist of being political exiles in a country that doesn’t always welcome immigrants.

“How the Garcia Girls Lost Their Accents” offers a captivating peek back at four sisters living in America in the early 1960s. The drama kicks off the new theater season at Santa Rosa Junior College.

“Peek” is a suitable descriptor for the play because we get just two stories from the 1991 novel of the same title by Julia Alvarez. The book’s 15 short stories depict the lives of sisters in a family that sought political asylum in the U.S., coming from the Dominican Republic under the dictatorship of Rafael Trujillo.

In the book, Alvarez takes the uncommon approach of beginning with the sisters as adults and then moving in reverse chronological order. For the theater, director John Shillington has taken a different but still unusual structure: a verbatim performance where the actors recite all the novel’s words, including the narration and “attributives,” such as “Fifi said.”

The “page to stage” approach fits surprisingly well. Multiple characters voiced the story as the corresponding drama unfolded before the audience.

In the first act, the narrative added insight about the family’s upper class background. It also helped in understanding the motives behind sister Sandi’s headstrong decision to ignore her mother’s orders on how to behave when the family goes to dinner with an American doctor and his hard-drinking wife. In the second act, the narration offered another twist for the story of sister Yolanda at college. There the stage was shared by two “Yolandas”: one, “Yoyo,” depicting that young adult student, and a second, “Yo,” an older version of herself speaking of those long-ago years.

In the first act, the cast portrayed a family unsure how it would adapt to a new life in New York City in the early 1960s. The actors playing the four sisters delighted in playing innocents amid the wonder of a strange land, one populated with a mean-spirited downstairs neighbor, dashing flamenco dancers at their dinner venue and a doctor’s wife who inappropriately kisses their father.

In the second act, the story revolved around Yolanda navigating college life in the late 1960s. She falls for a boy. He wants her body. The resulting tension and heartbreak causes her to wonder if she ever will find someone to understand who she is, a “peculiar mix of Catholicism and agnosticism, Hispanic and American styles.”

The play continues through Oct. 14 at the college’s Newman Auditorium. For times and more information, click here. The performances, which contain strong language and adult content, are recommended for ages 14 and above.

The college’s Burbank Auditorium remains closed for renovation. Thus, the Theatre Arts season continues Nov. 16 to Dec. 2 at Maria Carrillo High School with “Shrek The Musical,” followed by “All the Great Books (abridged)” at Newman Auditorium March 8-17 and ending April 19 to May 5 at Carrillo with “Jesus Christ Superstar.”