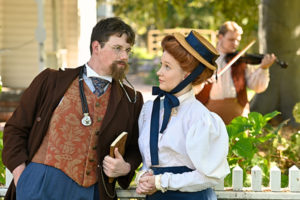 Suffering, struggling, embarrassment, passion and curiosity—especially curiosity—these markers of the human condition can power stories. All can be found in stage sketches that range from the touching to the outlandish in “The Good Doctor,” the latest production of Santa Rosa Junior College Theatre Arts.

The play by Neil Simon is based on a series of short stories by 19th century Russian author Anton Chekov. The unrelated scenes are laced with humor, allowing the cast members to deftly adopt the personas of characters that show themselves wily or bewildered, proud or weak-kneed, slightly off kilter or wild-eyed crazy.

The play’s narrator, a writer played by Riley Craig, guides the audience from one vignette to another. We encounter a bureaucrat horrified at the theater after he uncontrollably sneezes on his superior. We meet a man of undaunted confidence who demonstrates how he seduces other men’s wives without speaking to them—their husbands unwittingly convey his enticements. We watch a young medical student determined to pull his first aching tooth from an increasingly worried patient. We see a banker whose gout is set off by the ranting of a railing woman who makes up in histrionics what she lacks in reason. We encounter a sailor who offers for the price of admission to stage his own “drowning.”

Expect lots of humor and twists as these and other well-played scenes unfold.

Mixed in are dances, a touching song by cast members Haley Hollis and Robert Campbell and the fine mandolin and violin work of music director Gus Garelick. Garelick received warm applause during the prelude and intermission Friday night for his mandolin licks.

The production continues through Oct. 13 at Newman Auditorium. For tickets and information, click here.

As the actors perform, the $30 million renovation of Burbank Auditorium proceeds. The building is slated to be ready for spring theater productions.

The college had hoped to have Burbank ready for the fall musical, but for the third year instructors have needed to find an alternate location. The fall musical, “The Sound of Music,” will take place Nov. 22 to Dec. 8 at Sonoma State University’s Person Theatre.

Next spring the college will produce “The Cripple of Inishmaan,” March 6 to 15 at the new Burbank Studio Theatre. The drama season will conclude with “The Wedding Singer,” which will be performed April 17 to May 3 in the new Burbank.