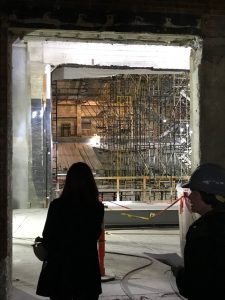 The view from backstage into the interior of the Burbank Theater. Photo by Robert Digitale 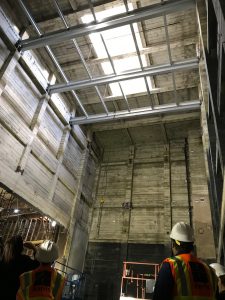 The fly loft above the stage at Burbank Theatre. Photo by Robert Digitale.

Those able to take a tour last week of the nearly 80-year-old theater beheld its remaking in progress. Floor-to-ceiling scaffolding stood inside the theater and a steep slope of concrete covered the rear section where  stadium-styled seating soon will allow patrons to enjoy unobstructed views of the stage.

Meanwhile, the theater’s exposed fly loft above the stage looked cavernous, and in the lobby shiny metal straps hung down from uncovered ceiling joists – the straps ready to one day hold air conditioning ducts that will sit overhead. 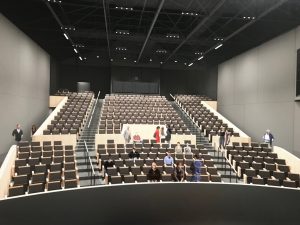 A rendering of the future seating area for Burbank Theatre. Design by Mark Cavagnero Associates and TLCD Architecture.

The first audiences could take their seats in the new theater this fall. A second smaller performance studio also is taking shape next door.

Burbank’s renovation and the construction of the smaller theater became possible due to the passage of Measure H, a $410 million bond approved by voters in 2014. 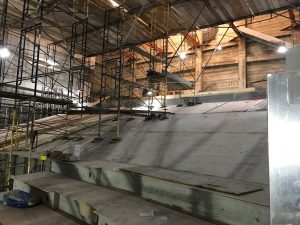 The college this month is taking small groups of community members on tours to see the work underway. Officials are hoping patrons will make donations in order to name various parts of the facility – from $500 for a seat to $500,000 for the entire theater.

As part of the changes, Burbank’s capacity will shrink to 400 seats from 600, but the new “raked” seating configuration will give audiences “a terrific view from every seat,” said Leslie McCauley, chairwoman and artistic director of the college’s Theatre Arts department. 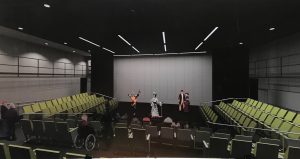 A rendering of the 200-seat Studio theatre. Design by Mark Cavagnero Associates and TLCD Architecture.

Next door’s studio theater will seat 200 and allow the college’s noted Summer Repertory Theatre (SRT) to simultaneously offer productions in two different venues. That will mean student dramatists no longer will need to use the classroom-like Newman Auditorium for their more-intimate performances. 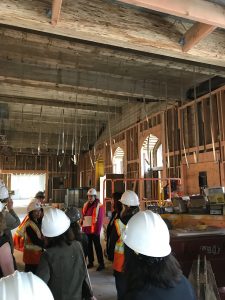 The future lobby of Burbank Theatre. Photo by Robert Digitale.

The new theater facilities will feature an expanded outside terrace at the front entrance and a spacious new lobby with larger box office.

The entire theater is accessible by wheelchair. Even the orchestra pit has a lift.

The theater renovations were designed by the architectural firm of Mark Cavagnero Associates of San Francisco and the project’s architect of record,  TLCD Architecture of Santa Rosa. 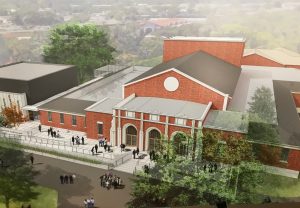 A rendering of the front of the renovated Burbank Theatre. Design by Mark Cavagnero Associates and TLCD Architecture.

While the Burbank construction continues, material is slated to arrive this week to build SRT’s temporary theater in the round out on former tennis courts near the west side of campus. That tent-like structure, which McCauley said will feature glass doors and air conditioning, will open June 21 with “Mamma Mia.” The SRT season will include productions of “Bonnie & Clyde,” “Pippin,” “Sylvia” and “The 39 Steps.” For tickets and information, click here 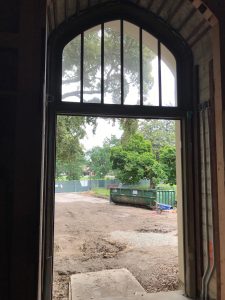 The arched doors at the front entrance remain. Photo by Robert Digitale.

Meanwhile, the Theatre Arts Department plans this November to produce “The Sound of Music” as its annual fall musical. The fall productions, which have included “Phantom of the Opera” and “Les Miserables,” have become a popular holiday tradition for families.

Opening night is roughly six months away and much renovation work remains. But McCauley said the department hopes all will be ready to open the musical in Burbank this fall.