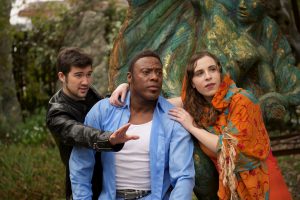 What is it about this Jesus? Does he have true star power? Can he deliver what his fans really want?

Nearly all the characters in “Jesus Christ Superstar,” the powerful musical from Santa Rosa Junior College Theatre Arts, seem either mystified or agitated by the man. The former seem to adore Jesus and want to latch onto him, at least while his star is rising. The latter, including those in power, want him off the stage for good.

Even Jesus, portrayed by the superbly talented Phillip Percy Williams, appears conflicted about what fame has brought him. He seems supernatural enough when he rejects the call to overthrow his people’s Romans oppressors and instead offers the mystical advice that “to conquer death you only have to die.” But he sounds all too human in Gethsemane when he questions the idea of a sacrificial death on a cross and asks, “If I die, what will be my reward?”

Theatergoers won’t get pat answers on what to make of Jesus. But they can be assured of a first-rate show with rousing vocals, dance moves and instrumental solos.

Along with the cast, members of the nine-piece orchestra often take to the stage for this rock opera by Andrew Lloyd Webber and Tim Rice. At the Good Friday premiere, the musicians added to the delight of a nearly packed audience – from the flying fingers of electric guitarist Ian Scherer to the finale’s haunting violin passage from Lisa Doyle.

All in all, it amounts to another great work of community theater, with cast members shining in roles big and small.

Much of the story is presented from the view of Judas Iscariot, one of the 12 disciples. He worries that Jesus is starting to believe the hype about him being the Messiah and has set himself on a collision course with the religious and political establishment. Cast member Noah Sternhill deftly makes Judas a somewhat sympathetic but calculating man who fears he’ll be among those crushed if Jesus pushes his adversaries too far.

Is it self-preservation that prompts Judas to betray his friend for a bag of silver coins? Does Jesus think he’s more than a man? And why did he die?

We get more questions than answers, and the reflections come by way of some very good music. Ariana LaMark as Mary Magdalene gave an outstanding rendition of “I Don’t Know How to Love Him.” Sternhill, whose talent has energized several past productions, joined the ensemble in rocking their way with style through the key questions of “Superstar.”

Meanwhile, Williams, a guest artist whose professional credits include San Francisco’s Beach Blanket Babylon cabaret show, made his voice soar to incredible heights in a variety of numbers.

Even so, his strongest moments came in portraying a man whipped, mocked and crucified. In those scenes, we may still have questions about the divine goodness of Jesus, but his enemies seem all too familiar with evil.

The musical is directed by Leslie McCauley with Janis Dunson Wilson as music director.

While the production never proclaims who Jesus is, the near-blinding light that breaks out on stage after his death suggests that we haven’t come to the end of the story. As S. M. Lockridge, a 20th century African-American preacher, said of the events thus far, “It’s Friday, but Sunday’s coming.”

The musical continues through May 5 at the Maria Carrillo High School Theatre, 6975 Montecito Blvd. For tickets and other information, click here.

Next up will be the return of SRT, the college’s Summer Repertory Theater, which opens June 21. This year’s offerings include “Mama Mia,” “Pippin,” “Sylvia,” “The 39 Steps” and “Bonnie & Clyde.” For tickets and information, click here.

Here is a preview on the show by longtime arts reporter Dan Taylor.