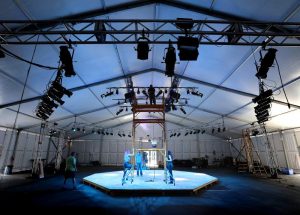 The Pavilion sans seats and backdrops. Photo by John Burgess, The Press Democrat

After a year’s hiatus, Summer Repertory Theatre is back for a new season. And delightfully, it offers audiences both something old and something new.

What’s old is the abundance of collegiate talent that once more has been drawn from around the U.S. to the summer theater program at Santa Rosa Junior College. What’s new is the setting for this year’s three musicals.

On Friday night two dozen actors from 14 colleges and conservatories kicked off the new season with a rollicking version of the ABBA-inspired musical, “Mamma Mia!”

As ever, the cast displayed the captivating vocals and in-sync dance moves that have drawn audiences to summertime productions at the college for nearly five decades. But patrons last week got an added treat, the chance to watch the performance in-the-round inside a temporary white pavilion set up on the campus’s old tennis courts.

Along with “Mamma Mia,” the musicals “Bonnie & Clyde” and “Pippin” will play in the pavilion, a hard-sided tent with glass doors and air conditioning. The 270-seat venue offers an intimate setting that the opening production put to good use.

Artistic Director James Newman said the program’s 47th season will be unlike any other.

The use of the pavilion “won’t really happen at any other time in our history,” Newman said Friday as he welcomed patrons to opening night.

Friday provided the first Summer Rep performance in two years. Last year’s shows were canceled after the program lost an alternate venue to the college’s Burbank Auditorium, which remains in the midst of a $30 million renovation. Burbank is slated to reopen in November for the college’s annual fall musical.

On Friday the audience seemed to love both the show and the new venue. 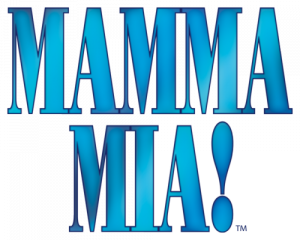 As director Johanna Pinzler observed, “Mamma Mia!” is a “juke box musical” for which a story has been crafted to give an excuse for breaking out the ABBA songbook. Be prepared for “Dancing Queen,” “Take a Chance on Me” and “The Winner Takes it All.” The show even includes an encore/big dance number that includes “Waterloo,” a song that the show’s creators apparently couldn’t figure a way to wrap the plot around.

The story features a daughter on the eve of her Greek Isle wedding. To her nuptials she has invited three men on the suspicion that any one of them might be her biological father. Of course, she doesn’t tell her mother about the invitations. Twenty years have passed since the mom, Donna, laid eyes on the three fellows. How will it all work out?

The show benefitted from a strong cast, especially Abby Cramer as Donna, Macy McKown as the daughter Sophie and Sam Pickart as the man who still loves Donna.

In the pavilion, five sections of seats surround the stage. On Friday each audience member sat near the action and, with stadium-style seating, everyone had a clear view of the players. Patrons couldn’t see the seven-piece orchestra. It remained hidden behind backdrops, but its sound nicely filled the space.

Along with the musicals, SRT will produce two smaller shows, “The 39 Steps” and “Sylvia.” Both plays will take place in the college’s Newman Auditorium.

The season runs through Aug. 10. For tickets, performance dates and other information, click here.