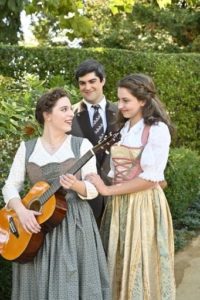 Building delays and campus closures due to wildfire threats made for extra challenges. But the cast and crew of Santa Rosa Junior College’s “The Sound of Music” can claim their place among the string of beloved holiday productions that the college Theatre Arts Department has offered up this past decade.

This latest gem comes off so well that audiences may discount the fact that the thespians needed to hit the road to Sonoma State University because the SRJC Burbank Theater wasn’t renovated in time. Patrons also may not appreciate how this fall’s Kincade fire and related power shutdowns cost the crew two weeks worth of preparation, as Department Chair Leslie McCauley told the Petaluma Argus Courier.

Despite all those setbacks, theater lovers can expect a show of glorious voices, uber cute child actors and a family-friendly drama of love and danger on the eve of World War II.

The show’s music, by Richard Rogers and Oscar Hammerstein, harkens to simpler times (thus, the lack of need for a drummer in the orchestra). Even so, its easily recognizable melodies have secured their place in the prodigious songbook of American theater. Its offerings include “My Favorite Things,” “Sixteen Going on Seventeen,” “Do-Re-Mi,” “So Long, Farewell,” and, of course, the title number, where “The hills are alive …”

At Friday’s opening those tunes were sweetly offered up by a cast filled with knockout vocalists. It was simply delightful to sit back and soak up the show’s opening number, where the nuns of Nonnberg Abbey raise their voices in Latin with the ethereal strains of “Preludium.” That gentle beginning set the tone for the rest of the evening.

The show succeeded in large measure because of the superb voice and spunk of Ariana LaMark. She plays Maria, the young postulant who will become a governess for a rich widower with seven children. Joining LaMark were such talented vocalists as the exquisite Crystal McDougall, playing Mother Abbess, and the eight players of the von Trapp family, starting with Michael Coury Murdock as Captain von Trapp.

The depth of talent may seem unusual for a community college production. But it happens because SRJC draws so many players with acting and vocal experience. Of the 30-plus cast members, at least a dozen had previous roles in community theaters. Some of those also had performed in previous SRJC shows, including LaMark, who played Mary Magdalene in last spring’s “Jesus Christ Superstar.”

When it came to delivering lines, the seven adorable actors playing the von Trapp children often stole the scenes. But they did get competition from Heather Buck as Elsa Schräder, the captain’s initial love interest. Another standout was Zac Parreira as Max Detweiller, the captain’s friend, concert promoter and self-described appeaser in the face of the Nazi’s looming takeover of Austria.

The eventual occupation by Hitler’s forces shifts the story from its early preoccupation with such childhood delights as “cream-colored ponies and crisp apple strudels.” The captain must decide whether to join or resist the Nazis. His choice brings on the show’s drama, even if we know that all must end well.

One of the production’s highlights was the eye-catching set by scenic designer Peter Crompton. Six rectangular columns ringed the stage. Around those towering edifices the crew at times slid in L-shaped staircases, abbey gates and terrace doors. For scenes at the abbey, arched stained glass windows descended from above, as did large picture windows to help define the von Trapp’s mansion. Behind the stage loomed a massive projection of a alpine peak. That snow-dappled image changed as the story unfolded to include moving clouds, twinkling stars, driving rain and—shortly before the story’s climax—a line of menacing red banners with swastikas atop them.

“The Sound of Music” continues through Dec. 8. For information and tickets, click here.

The production belongs to a series of college milestones in a 12-month period­­­­­—each linked to the still-ongoing, $30 million renovation of Burbank Auditorium, a campus mainstay for nearly 80 years.

First, “The Sound of Music” is the first collaborative production between SRJC and SSU. (You can read more here about the collaboration in this nice piece by my old colleague, Dan Taylor.) Second, for the first time in its 45-year-plus history, the college’s Summer Reportory Theater program last summer held its musicals in the round in a temporary white pavilion installed on former tennis courts.

Third, the college next winter will present its first production in the new Studio Theatre attached to Burbank. “The Cripple of Inishmaan” will run there March 6 to 15. Finally, on April 17 the Burbank itself will open with its first musical, “The Wedding Singer.” That show will run until May 3.