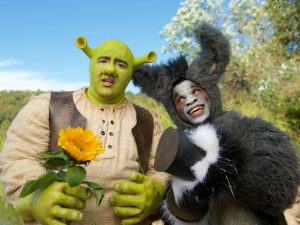 Ever feel like this big, bright beautiful world is for everybody but you? So does Shrek, and his adventures can jolt your funny bone even as they remind you what matters most about love and friendship.

“Shrek the Musical” is this year’s holiday treat from Santa Rosa Junior College’s Theatre Arts Department. Longtime patrons know that means something special, and this season’s production serves up a fun story and some over-the-top performances by the lead actors. The rest of the cast also gets to light up the stage. They have their time performing catchy musical dance numbers while portraying a horde of displaced fairytale creatures, including Pinocchio, Humpty Dumpty and the three little pigs.

The musical is based on the 2001 film, and there was a reason it won an Oscar for Best Animated Feature. Also, it’s worth noting that the film’s sound track generally outshines the original songs created for the musical. (Fret not, diehard fans, you will get a rousing finale of “I’m a Believer.”)

What the musical does offer is the chance to see the characters up close, and director Laura Downing-Lee makes the most of it. With the cast’s help we watch a protagonist who for years hasn’t had a friend, and who must decide what to do when others want to draw near to him, possibly including the love of his life.

The production benefits greatly from Danny Bañales, who brings the big green ogre known as Shrek to life. His wee Scotish brogue works, as does his comedic timing while portraying a character whose parents sent him into the world at the age of 7. In musical numbers, perhaps because it was opening night, Bañales occasionally had trouble finding his note. But when he locked in, as on “When Words Fail,” he sang with power and beauty.

Samantha Bohlke-Slater delights as Princess Fiona, bringing an assertive determination to her plans to marry a prince, but also showing gnawing insecurities about who she is. (You’d be unsure, too, if you had spent your childhood and youth locked in a castle with a fire-breathing dragon.) A highlight that showed her musical chops came early in “I Know It’s Today,” sung sweetly with two younger “Fionas,” Annelise Ethington and Maryanne Boaz.

For Donkey, Isiah Carter seems to channel Eddie Murphy with the rapid-fire wit and zaniness of a creature whose mouth is always set on stream of consciousness. Carter makes Donkey the lovable key to bringing Shrek and Fiona together, and he does so with pizzazz in song and with his body-shimmying dance moves.

At times Friday, it seemed the whole production was going to get hijacked by Noah Sternhill as the diminutive and droll Lord Farquaad. He had the audience guffawing with his portrayal of the 3-foot-tall villain who is in love with himself. With a flick of his thick Prince Valiant haircut or a sly glance as he pauses in song, Sternhill knew he had us hooked. And his improbable dance moves alone were worth the price of admission. We already knew he could sing from his past performances in “Mary Poppins” and “Music Man,” but here is a role that will become etched in audience memories.

Dressed in eye-catching costumes by Maryanne Scozzari, the rest of the cast members rose to the occasion. Highlights included Michael Arbitter and his falsetto Pinocchio (not a wooden boy, he says, “I just have a glandular condition) to Jackie Diaz and her knockout version on behalf of the dragon of “Forever.” Fairytale creatures took over the stage in a couple of numbers, as do Lord Farquaad’s minions. Puppeteers deftly animated the dragon and Shrek and Fiona’s parents. Human-sized rats tap danced with the princess.

Conductor Rudolf Budginas and his eight-piece orchestra keep the production rolling along well.

The production is slated for a total of 13 performances through Dec. 2 at the Maria Carrillo High School Theatre, 6975 Montecito Blvd. For tickets and more information, click here.

The cast announced Friday that the college’s Burbank Auditorium should be renovated and ready for productions next summer. Good news indeed.