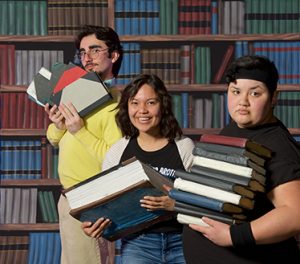 Okay, class. For your midterm, please answer the following questions: “What are the two greatest books ever written and why?”

Regardless of whether you feel glee or despair at such academic challenges, you can find something to like in “All the Great Books (Abridged),” the latest production from Santa Rosa Junior College Theatre Arts. It’s a wacky, scattershot review of the literary canon (slight pun intended). The experience may not inspire you to read but it will give you ample opportunities to laugh.

The setup involves the audience taking on the role of remedial high school seniors who still need to pass their school’s English requirement for graduation, which is slated to occur in less than two hours. In desperation, three substitute teachers are brought in to quickly cover a syllabus of more than 80 works of fiction, poetry and prose. They touch on everything from “Great Expectations” to “Green Eggs and Ham,” from “The Divine Comedy” to “Dianetics,” from “The Scarlet Letter “ to “Silent Spring.” Expect bite-sized portions of Tolstoy, Twain, Austen, Homer, Dumas, Brontë, Thoreau and others, served up with zany wit and a dash of slapstick.

The smashups come fast and furious. “The Iliad” and “The Odyssey” fuse to become “The Idiotity,” complete with a light-stepping Trojan Horse. “Little Women” is explained in terms of a sports team. “Don Quixote” is presented in the original Spanish, with some creative translation when the characters get huffy. In the final minutes, one-liners sum up the many works not yet highlighted.

The production benefits from its three lead cast members: Alexx Valdez as Coach, Christopher Shayota as Professor and Jasmine Flores-Nunez as Student Teacher. Their unabashed enthusiasm for hijinks brings to mind a mix of Monty Python, Saturday Night Live, Carol Burnett and Groucho Marx. When the crowd takes delight that the professor has declared himself a dramatist schooled at SRJC, Shayota gives a wry smile and offers, “I think some of you have been accepted for the fall.”

At Friday night’s opening, the large crowd in Newman Auditorium seemed to relish their participatory role, playing along with a gag linked to the name Plato (achoo!), at intermission handing in their midterm responses to the above best book questions and getting the three leads to sign “diplomas” afterward in the lobby.

The play continues through March 17. For times and tickets, click here.

Next up for SRJC is “Jesus Christ Superstar,” which runs April 19 through May 5 at Maria Carrillo High School.